Over 200 Pocatello-area Veterans and their families attended the “Farm Bureau Salute to Idaho Veterans” on Thursday, November 10, 2011, at the Farm Bureau home office in Pocatello. This special event was designed to recognize and thank those members of the community who have served their neighbors and fellow citizens in the Armed Forces. The day’s activities began with a traditional flag ceremony presented by the Pocatello Veterans Honor Guard. This was followed by the recognition of attending Veterans with a brass quintet playing the military branch hymns, a luncheon, and a slideshow of local Veterans during active duty accompanied by a vocal quartet from ISU. At the conclusion of the day, each Veteran received a “Salute to Idaho Veterans” commemorative coin and a complimentary photo taken next to Farm Bureau’s “The Color Guard” eagle statue.

The “Salute” was conceived by James Hughes, a director at Farm Bureau Mutual Insurance Company of Idaho. Hughes also coordinated the company’s “Salute” efforts and was the event’s Master of Ceremonies. “The idea was to create a way, on or near Veterans Day,” Hughes said, “to show our deep appreciation for those who defend our freedoms and sacrifice their time, talents, and energy in the service of our nation.” Hughes added that the company “identified a number of ways we could have communicated our feelings and arrived at this approach… we are excited to see it come to fruition.”

The event was developed with input from the Pocatello Veterans Honor Guard, the Pocatello Chamber of Commerce Military Affairs Committee, the Idaho State University vocal and instrumental music departments, and a variety of Pocatello-area Veterans service organizations.

This year’s “Farm Bureau Salute to Idaho Veterans” was the beginning of an annual tradition. Next year’s “Salute” is scheduled for November 9. 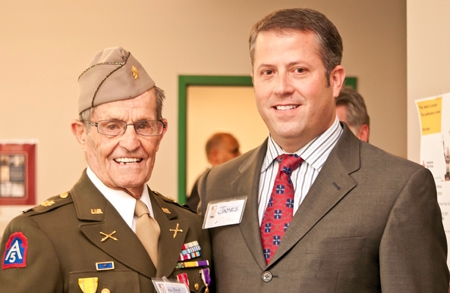 Above: James Hughes of Farm Bureau Mutual Insurance Company of Idaho® with a Pocatello Veteran at the “Farm Bureau Salute to Idaho Veterans.”