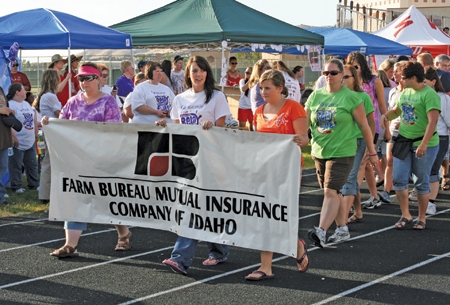 Above: The 2010 Farm Bureau Insurance Relay For Life of Pocatello team

When the Farm Bureau Insurance Relay For Life of Pocatello team announced its 2010 fundraising goal of $10,000 last April, some were skeptical. “People were a little nervous because the local economy is still recovering,” said team captain Brenda Swindle.

But by the time of the Relay’s July 17 closing ceremonies, the Farm Bureau Insurance team had raised $11,690 for the fight against cancer and captured the Top Fundraising Team award for the fifth consecutive year.

In light of businesses and individuals still tightening their proverbial belts, Swindle put her faith in her fellow Farm Bureau Insurance employees when she set the goal. “I did so keeping in mind that the economy wasn’t strong, but the charitable spirit of our employees was.”

Her sentiment was echoed by the team’s co-captain, Melinda Johnson. “When we set the goal, we looked at our employees’ track record for charitable giving.”

These goals, not the Top Fundraiser award, are what drive the team’s efforts. “I joined the team this year with the memory from last year of an older gentlemen on crutches who slowly made his way around the track at 3:00 AM,” says team member and underwriting assistant Lindsay Kopp.

Jennifer Lowrey, a proofreader, says she joined the team because she lost her grandmother to cancer and she “wants to do whatever I possibly can to help find a cure.”

Underwriter Marci Hamann feels that participating in the Relay is a gift to those who have lost their battle with cancer, to their families, and to current cancer patients. “It’s the least I can do,” she says.

Jenny Losee, an underwriting coordinator, says “this year’s Relay hit a little bit closer to home for me. A young girl I knew died this year from cancer. She was a doll and I felt like I could try to do something for her and her family, even though it wasn’t very much at all.”

Audit supervisor Linda Peterson participates in the Relay for herself as a cancer survivor, and also in memory of her husband who lost his battle with cancer.

Swindle admits that it took longer than usual to reach this year’s goal given the economic climate. “But we think future Farm Bureau Insurance Relay teams will be able to meet their fundraising goals because time and again our employees rise to the occasion.”