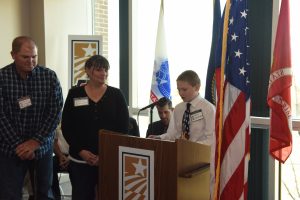 The Patriot missile systems used during Operation Desert Storm were prone to electrical failures. It was David Hutchings’ job to make spur-of-the-moment tweaks under pressure to make certain they had power.

Thanks to the eloquence of his son, eighth-grader Roy Hutchings, who won an essay contest sponsored by Idaho Farm Bureau, the community now knows of David’s contributions to our national defense.

Roy, who attends East Minico Middle School in Rupert, was one of three winners of the essay contest, which challenged students to put in words what a family member’s military service means to them. Nicholas Weick, a sixth-grader at Holy Spirit Catholic School in Pocatello, and Amelia Prins, a 12th-grader at Hagerman Junior-Senior High School, also submitted winning essays.

Roy, accompanied by his father, and Weick, joined by his Vietnam veteran grandfather Fred Smith, both read their essays on Friday morning during the ninth annual Farm Bureau Salute to Idaho Veterans.

“Enlisting in the military has been a rite of passage for the men in my family,” Roy wrote in his essay, adding he plans to keep the family tradition alive and join the Army. “My great-grandpa served in World War II, my great-uncle was a part of Doolittle’s Raid, my grandpa served in the Vietnam War and multiple uncles have served in Desert Shield, Desert Storm, Somalia and the Iraq and Afghanistan wars.”

David, who earned the rank of specialist E-4 with the U.S. Army while serving from 1992 through 1996, was tasked with keeping the generators and turbines running to power U.S. missile systems. To David, who was stationed in Dhahran, Saudi Arabia, from 1992 to 1993 and was later moved to Korea after Desert Storm, the sound of air-raid sirens meant that it was “game on.”

David served a vital function, and he often used the most rudimentary of tools and parts to keep high-tech military equipment operational.

“The electronics were always breaking, and then getting parts was always a problem,” he recalled. “You had to figure out ways to get around the circuits to make them work again — literally putting in paperclips to jump circuits to make things work.”

David is now disabled from serious injuries sustained during his military service, including shards of glass that ripped through his leg in Saudi Arabia and a piece of metal that punctured his back.

Roy’s essay focused largely on five life lessons his father has taught him through his perseverance, despite his disabilities: have respect, love America, remember there’s no crying in the Army, never stop trying and don’t take life for granted.

Though he walks with a cane, David remains active with his sons, taking them on hunting trips and other adventures to prove to them they can overcome any adversity.

“Just because you’ve got a cane or something like that, you don’t quit trying to do what you want to do,” David said. “Things still have to get done, no matter how bad you’re messed up. You have to find a way to adapt.”

Weick described in his essay how his grandfather, who held the rank of corporal E-4 in the Marines, earned two Purple Hearts in Vietnam.

“He was a powder monkey,” Weick wrote. “He would go through tunnels, place a bomb and then crawl out of the tunnel as fast as he could.”

Prins wrote about her father and how his 26 years of service with the U.S. Army has shaped her life. Prins wrote that she’s been an “Army brat,” living in several states and even a foreign country due to her father’s service.

“Out of those 26 years, he was deployed 17 times, which comes to around 15 years of him being out of the house, leaving my family without the head of the household,” Prins wrote. “So instead, he was overseas, fighting for our country’s freedom and for the oppressed living in the deserted lands, not having the peace, justice and hope that we are generously given, not only sacrificing his own life, but also the glue holding our family together.”

Mike Myers, director of corporate marketing with Farm Bureau Mutual Insurance Company of Idaho, said the contest, in its ninth year, drew 66 entries. Typically, Myers said it’s one of the highlights of his organization’s Salute to Idaho Veterans when the children read their essays, standing with the family member they’ve chosen to honor.